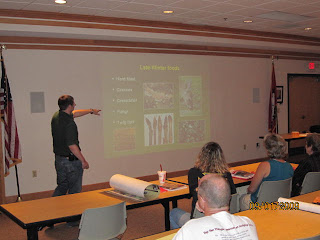 Deer Program Coordinator, Brad Miller talks with hunters about seasonal foods for Whitetails. Miller and other Game and Fish deer biologist, enforcement officers, and wildlife managers were at the River Valley Nature Center in Fort Smith Tuesday Sept 1 to brief hunters on the condition of the states deer habitat, herd health, harvest numbers and regulation changes.

Regarding regulation changes, the coolest change is that deer check stations have been eliminated! To tag a deer this fall you simply make a phone call. (online checking is still available) As in the past you are still required to immediately fill out your tag, note the zone it was killed in but instead of hauling your deer around in search of an open check station, you simply pull out your cell phone and call 1-877-507-4263. You are required to call within 24 hours of harvest. At some point during the call you will be given a confirmation number. The confirmation number is your proof of checking, write it down. Many states surrounding Arkansas are on a similar automated program. "Call in checking" will offer convenience for us hunters while at the same time provide real time harvest data to the Game and Fish Commission.

Vigilant hunters carefully noted the varying conception dates or "rut" throughout the state as they were reported by Baxter. Generally starting earlier in the north west part of the state and later as you move to the South East Delta region. (Mississippi alluvial plains rut was Nov 23-Dec 2). I know where I will be Thanksgiving week.