The cold front brought the storm in fast and unloaded what seemed like gale force winds against the walls of my 3 room tent. Using my flashlight, I peered out from the warmth of my sleeping bag to watch the rapid flutter of the thin fabric tent walls. The tent was struggling to protect me and my gear from the cold rain and gust of the night time storm. It was as if I had gotten zipped up into some wacky carnival thrill ride where I could only guess what was about to be revealed as the storm crawled over us. I sent a text message to my wife Teresa that we were in a storm at 10:22pm.

This was the first night of my 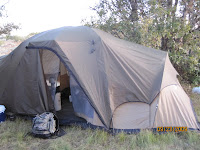 The temperature was falling and forecast to drop below 20 degrees by morning. We all knew the weather in Colorado was unpredictable but none of us were prepared for these temperatures in September. The rain had now given way to a torrid of marble sized hail that was now pounding the roof and walls of my tent. The darkness was constantly interrupted by  flashes of light followed by near instant cracks of ear piercing thunder. As I thought about the consequences of our camp location(on the peak of a ridge top), I got a vision of the comical Wile E. Coyote, blackened to a crisp, white eyes blinking in a dazed stupor, while holding the skeletal remnants of a charred, still smoking umbrella.

The wind was getting increasingly more powerful as I watched my thin walled shelter yield more and more to the breath of the storm., yet after each violent gust the fiberglass tent poles would promptly return to the tent to its upright position.

The almost horizontal driving rain was now intent on finding its way into my tent via the screened windows and rain fly cover. Splatters of water were now finding my face, pillow and bedding. A wet sleeping bag was going to make for a long miserable night in the approaching cold. To avoid the spray I moved my air mattress to the center of the tent. This helped but I was still being constantly misted through the screen. Luckily I had purchased an inexpensive Wal-Mart brand camo rain poncho for the trip. As I unpacked it in the frigid night air the otherwise pliable poncho was now a noisy sheet of stiff plastic that struggled to lay flat over my camp bed. In-spite of the creases and pockets of the stiff poncho collecting pools of rainwater, it did manage to keep me and my bedding fairly dry during the storm. 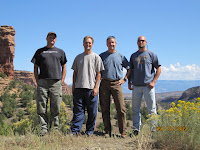 continued their powerful but sporadic bursts I rolled over and attempted to get some sleep. I am feeling confident, cozy and warm with my weather proofing efforts. I am exhausted and personally for me the roar of the winds and the drone of the constant rain/hail mix actually make for good sleeping. Natures white noise. As I am drifting off to sleep I am startled by a loud SNAP! at the opposite corner of the tent. The wind gusts have finally exceeded the limits of my fiberglass tent poles! The loose tent walls were now flapping even louder in the fierce winds. I feared the large 10X20 tent was about to be torn loose from the tent stakes and drag me and my and gear across the open meadow and through jagged oak brush like a paratrooper being dragged by his open parachute. Minutes later I realized that the tent stakes and remaining poles are holding firm against the wind. Now clothed and with flashlight in hand I exited the tent to a bombardment of stinging hail on my neck and hands to analyze the situation. Using a couple of Carbon Express Arrows, and Gorilla duct tape I attempted a McGyver style fix using arrow shafts for a splint on the broken tent pole. I quickly found out the wind gust were much too powerful for even the three Carbon Express arrow shafts I had taped across the fractured tent pole.

Standing in the elements, all I could do is watch by the glow of my flash light as the hail and water accumulated on the now deflated wall. Water was pouring onto  my tent floor though the now horizontal screen window as it lay flat. I reentered my tent. Two of the three rooms were still standing tall. I quickly consolidated my belongings to the two remaining rooms and simply zipped up the door to the collapsed and now sinking room. The result was not unlike a submarine captain who would strategically shut selected d 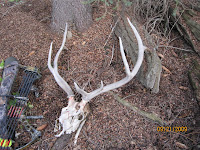 oors to a torpedo damaged section of his submarine to keep it from sinking. Luckily in my case there were no poor sailors to be entombed.

I cranked up my Lil Buddy propane heater to the high setting and dried myself off along with pillows cases and pillows over the flame. Once dried I crawled back into my warm, comfortable and somewhat dry bed. The fierce storm has just about passed. My last text to my somewhat concerned wife Teresa indicating all was well was at 11:22pm.
at 9:54 PM