Any time spent in the deer woods is a great time but I am especially partial to the late season bowhunts on White River Refuge. The claustrophobic curtain of greenery has fallen and the rain soaked mucky soil is better able to record the tracks and trails of unseen deer. Additionally the buzzing of mosquitoes and gnats have relinquished their patrols to the kinder periodic chorus of honking geese overhead. Nothing represents the wilds of White River Refuge more than the hauntingly solemn sound of Canadian geese passing overhead while silhouetted against a gray wintery sky.

This first week of January was forecasted to be rainy and to the delight of my wife and daughter, who would accompany me on this trip, was to be unusually warm for the next few days. This trip would be partially a family affair since my brother Robert, who lives in North Carolina, was to be in Dewitt visiting. I thought great, I will bring my camper, squeeze in a little bowhunting, and visit family all at the same time. We left Fort Smith in the A.M. but with two women in tow, by the time I made it to the refuge Thursday Jan 1, I had only enough time to set up the camper before darkness set in.

The girls would sleep in the next day while I bowhunted. Alone the next morning, I unloaded my 4wheeler, bows and pack in the damp pre dawn darkness. The rain had ceased but the patter of wate 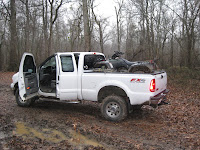 r droplets were still falling from the soaked tree limbs overhead. It had been late November since I had been down this particular trail on my 4wheeler. The sloppy rain soaked 4-wheeler trail would have been bad enough but when you throw in the recent heavy duck hunter traffic it was unrecognizable. In the darkness the 3 mile route to my usual stand location seemed unattainable as the trail was difficult to follow and underwater in long stretches. After a long and uneasy half mile on my winchless Honda 4-wheeler and the continued dread of getting stuck in the muck, I ceased my advance up the trail. With Summit climber stand on my back and Pearson Z-32 in hand I marched off into the dark wet woods. I didn't have a clue where I was going to hang my stand. I've hunted blind before and this would be no different. Sometimes you have to adapt, improvise and make the best of the situation that your dealt. This was the start to my new years January White River Refuge bowhunt.

Over the next couple of stand sittings I used the opportunity to explore new hunting areas several miles north. Saturday evening I found myself 25 plus feet up a telephone pole size Overcup tree. It faced a slough in an area that had recently been select cut. The deer sign was plentiful but it was wide open like a park. I could see 100 yards to the right and left of me. My initial concern was that this area was too open and all the deer sign was being made at night. The slough snaked its way in front of me at 35 yards with a Nuttall oak tree on its edge that had carpeted the ground with fresh acorns. The deer trail was deep and muddy skirting the slough up to the Nuttall oak.

At 3:45pm off to my left I spotted movement of two does at 60-70 yards... I thought man, in spite of the rainy weather, this was going to finally work out. As the deer made their way along the slough to the Nuttall, I picked up my bow, eased myself to a standing position and prepared myself for the end of the hunt. As I waited for the approaching does I spot a good mature racked buck behind them. My attention on this buck is short lived as I see a second bigger buck and it quickly becomes obvious that this second buck is the largest racked whitetail I have ever seen in thirty years of hunting on WRNWR. He's appeared in front of the first 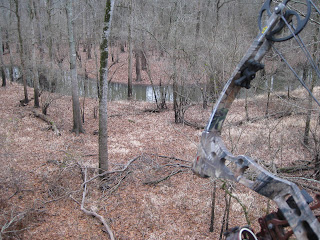 buck, and spooks the does which run off to my left. As the does make their way into the open this big chested guy just confidently walks from the sloughs edge out into the wide open at 60yrds. In a frantic effort to lure him from the does I give a couple of soft blows on my grunt tube. He hears me and stops for a full minute or even two and surveys the open timber in my direction while occasionally glancing away from me toward the does. As he stands there I study his rack through my 6 power range finder. He has massively thick main beams, mahogany in color, slightly palmated in shape. His tines coming off the main beam are narrowly spaced having almost a picket fence like appearance to this apparent 12 point. As he looks my directions I note that his rack is not as fantastically wide as it is tall. The rack is not narrow, its just that the exceptional height and mass displayed in typical form is what captures my focus.

Standing broadside in the wide open at 60 yards he is out of bow range. For me to even consider drawing my bow at such a magnificent animal he would have to close the distance by another 25 or 30 yards. I knew I would never be any competition for the does and resigned myself to just admiring this big brute from a far. The does eventually bolt out of sight. The two bucks quickly resume their pursuit and follow behind them.

In past hunts I have felt a knot in my stomach at such missed opportunities and haunted by thoughts of what might have been. This time.. no disappointment. I felt elated and privileged to have seen such a ghostly and magnificent White River buck.