Nested in my lock-on I was barely 12 feet off the ground. I was well hidden among the scented boughs of a sturdy cedar tree that are common for stand locations in this area of Kansas. It is quickly evident that you don't have the tall easy climbing Overcup oak trees that permit the use of climbers that are our mainstay in Arkansas. 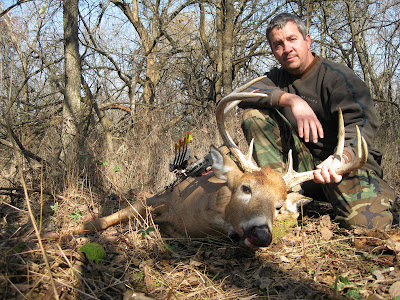 The buck came toward me at a steady gait moving North to South along a well worn trail that would deliver the buck to within 10 yards of my Cedar tree. I came to full draw and gave two successive grunts with increasing volume as the buck moved closer. He finally stopped in the last available shooting lane. He was a forgiving 10 yards away. At that range it is easy to think you have a chip shot and relax. I forced myself to take a second to focus my pin solidly on a spot behind the front shoulder of the 8 point buck. With finger on my release, I squeezed.  My 65lb Pearson Z-32  delivered the thunderhead tipped arrow right behind the shoulder.  WHACK!  The buck kicked, then  bolted and crashed through the forest.  Then silence.

The energy of the arrow was consumed in the split second it passed through the bucks rib cage. The crimson coated arrow was now laying harmlessly on top of the fall leaves that blanketed the late November forest floor. The arrows work was done. After a week in the Osage draws of eastern Kansas that are often nestled between corn and soybeans fields my hunt came to a fruitful close on a crisp but sunny Sunday November morning. A three and half year old eight point buck was now mine to quietly admire.

It was a primitive yet noble process that man has repeated for thousands of years. It still has the ability to inject the November chill directly into my veins and send uncontrolled shivers throughout my body. It serves as a reminder that despite our disconnected life of I-phones and "super center" processed hamburger there remains a vestige of predator instinct within that still calls us to the November forest each year.
at 9:25 PM