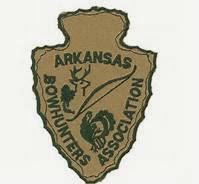 
Jim Myers, Arkansas Bowhunters Association's newly elected president, has announced his organization's endorsement of White River National Wildlife Refuge’s, proposed expanded "land acquisition areas." He has made a "call to action" for all his ABA members to write letters of support for the proposal.

In endorsing the plan Mr Myers noted that this proposal simply allows the refuge to buy from timber companies or landowners that are WILLING sellers. The proposal does not force anyone to sell if they choose not to.

Only about 10% of Arkansas forested wetlands remain. This proposal helps conserve what is left of some of our states most ecologically valuable bottomland forest in the lower Mississippi River Delta.

If approved it could open up an additional 125,000 acres to public access while conserving it for future generations. A large portion of this would possibly be purchased from a large private commercial timber company who has expressed interest in selling. Currently, even if the timber company wanted to donate its land to the refuge, the refuge would be prohibited from accepting it, simply because it falls outside the approved acquisition areas. This proposal would fix that.

Mr Myers noted that as with so many ABA conservation initiatives this effort will benefit ALL Arkansas sportsman not just bowhunters.

Members are asked to send support email/letters to the following: