The River Valley Nature Center in Fort Chaffee drew a full room of avid hunters as part of the Arkansas Game and Fish Commission's effort to involve the public in the hunting regulation decision process.  Wildlife Assistant Supervisor Kevin Lynch quickly  reviewed the twenty five "topics of discussion"  and then opened the floor for questions and comments. 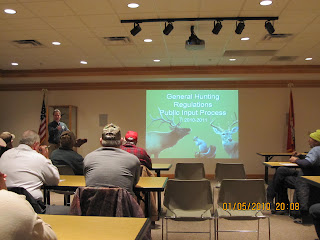 Unlike previous Game and Fish public meetings from years past this year had no real controversial  proposals being put forth.  Most were minor in nature or expanded hunting opportunities and found little opposition,  with the exception of the proposal to limit year round feeding.  Several attendees expressed that they wanted to continue their year round  mineral and feeding supplementation for deer.

Shorten The Archery Season?
It was NOT one of the  topics put forth by the Arkansas  Game and Fish Commission but a single attendee did address the meeting with his idea to close archery season after  December 31.  His misguided concern was that bowhunters were taking does that were pregnant in January and February.  I gathered that he thought  bowhunters were hurting next years fawn numbers by unwittingly shooting impregnated does.  First off I suspect most does that were pregnant in January  were probably just "a little bit pregnant" after the mid November rut.  Just my guess.  Secondly I took a quick look at deer harvest method reports over the last few years.  The number of deer that bowhunters  harvest during the entire length of our generous Arkansas bow season  did not equal what gun hunters take  on opening day of modern gun each November.  If I  narrow it down to what archers take in January and February the quantity  we are left with  appears  to be little more than a rounding error when compared to modern gun.  So if this gentleman really wants to increase  fawn numbers in any significant measure he is wasting his time  trying to achieve it through a shortened archery season.

1. Expanded squirrel season.  Think "Kids".   Season would start with our current spring squirrel season in May and continue through February.   Granted, at 48 years of age, the July humidity and my repeated education about chiggers and ticks first made me wonder why anyone would want to be out there.  But hey,  there was a time.  I would like to think there are school age hunters, not unlike myself 35 years ago,  who would appreciate any additional opportunities to tote their 22 rimfire to the woods during summer school break.  We kids are just more hardy I guess.

2. Allowing deer hunters with the basic $10.50  license to take their deer with bow or  muzzle loader as well as with modern firearms.   Think "Spouses".  Currently you can only use the single deer tag that comes with the license for modern gun. This proposed rule change would  make it more affordable for those thinking about taking up archery or muzzleloader hunting.  It also would  make it more affordable to take our spouses to deer woods with a bow.

Missed the meeting?  No problem,  until January 30th, 2010  you can still voice your opinion with a quick and easy on line survey from the Arkansas Game and Fish Commission.  For Online Survey Click Here or for PDF Survey/Comment Form Click Here.
at 9:23 PM